The recurring character of Maggie Cameron (Bettina Welch) was quickly embroiled in an early dramatic arc in Season One of Number 96: a romantic entanglement with the bisexual, fashion photographer, Bruce; his homosexual, law student lover, Don; their virginal, next door neighbour, Bev; a shady biker, Cliff; and Maggie's estranged husband, Victor. This plotline was novelised for a 1973 Arkon tie-in paperback, Bev & Bruce & Maggie & Don. Coincidentally, the actors who played her husband (Owen Weingott) and her lover, Bruce (Paul Weingott), were father and son.

From Episode #60, Maggie began convincing Vera about starting a business venture with her: a Double Bay fashion salon, The Tapemeasure. With Victor now working overseas, the two woman became rivals for the affections of advertising guru, Simon (who would also return in the 1974 feature film version). She also briefly moved in with Vera. 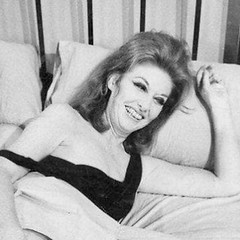 In a memo dated 11th December, 1972, a think tank by the writers listed some possible ways to bring back the popular Maggie Cameron during the show's second season. (As it turned out, the character did not return in aired episodes until the September of 1973, when she went into partnership with Jack and Don, and suddenly had reason to interfere in the ongoing management of Norma's Bar, and was a crucial player in the Bev/Bruce cliffhanger at the end of 1973.)

"Maggie phones Vera to say that she just had news from South America (or Mexico or somewhere else) where Victor was supervising some great new engineering project of his, that he has either been killed or badly injured and will be in hospital there for several months. Maggie has flown there to see him, but has now returned to keep an eye on his affairs as well as continue to run her own business.

"She tells Vera that she can't stand living in the big house by herself and is either shutting it up or renting it out to rich AMERICAN oil people. She asks can she come and stay a few months with Vera, paying her way of course, and handsomely! This could allow Vera to refurnish her flat in some style and there could be discussions and comedy on the refurbishing of it.

"Vera makes certain conditions that Maggie must abide by: cut down on heavy drinking; no more promiscuous playing around with men, etc, which Maggie agrees to. Their relationship is a good one, each respecting the other for certain qualities. This is actually the basic reason they are drawn to one another, each seeing in the other qualities they would like to have. Maggie goes to her studio and office to work and perhaps eventually Vera could do part-time work for Maggie in the Art Department, working both at home and studio. We might involve Simmons (who we've heard about continuously in the past) the head of the Art Dept. Maggie could be a strong and perhaps a protective defense for Vera, reversing their last relationship. She could also become involved with some friend of someone in 96. This friend might be that of Jack Sellars or Sonia."

Maggie did move into Vera's flat again in the lead-up to the bomb blast incident in 1975.

[Thanks Bob Huber for entrusting me with these official Cash Harmon papers.]